Lewisham Hospital consultation has been ignored - join the 26 January protest!

This is an update from Transpontine on the fight to save Lewisham hospital services from closure.

There has been massive opposition to proposals to close the Lewisham accident and emergency department and maternity services. Campaigners have held several very well-attended protests. The video below shows a 24 November protest which was attended by about 15,000 people.

Another protest is planned for 26 January.


The 'Trust Special Administrator' appointed by the ConDem government to oversee changes to health services in South London has recommended proceeding with closing not just the accident and emergency department but maternity services at Lewisham Hospital. The recommendations were included in the original consultation document issued in late October 2012, and are reiterated in the final report to Tory Health Secretary Jeremy Hunt - who will have the final say on whether or not to implement the changes.

The final report ignores the results of the consultation which were overwhelmingly against the proposed changes to Lewisham Hospital.

According to the official Ipsos MORI Independent summary of the consultation: 'The consultation ran for 30 working days and received a total of 8,224 responses from stakeholders, patients, the public and health professionals... Regarding the proposed changes to urgent and emergency care, many individual respondents opposed the changes (90%), while amongst Lewisham residents (who make up a large proportion of the consultation responses received), the level of opposition rose to 96%.

Overall, there was limited support for these proposed changes (eight per cent). Amongst organisations and groups responding via the response form, the majority opposed the proposed changes to urgent and emergency care (24% support vs. 67% oppose)...

A large proportion of the free-text comments provided stated that University Hospital Lewisham (UHL) should keep its Accident and Emergency (A&E) department. The reasons underpinning this were good perceptions of the UHL service and not wanting to waste money from the refurbishment; the need for a large population to be served by an A&E; seeing it as unfair to penalise UHL when it is performing well; concerns about capacity at other A&Es; concerns about travelling to other A&Es, including travel times and their impact on safety'.

As well as generating the largest demonstration seen in Lewisham for at least a generation, the changes to the local hospital have been opposed by a wide range of public, political, professional and clinical opinion. If democracy did what it said on the tin there would be no question of the plan proceeding. The overwhelming majority of people living in a borough, and many beyond, are horrified by the plans.

Cleary the notion that the National Health Service should respond to the views of patients is just empty rhetoric, and so too is the myth that local GPs have real influence.

The GP-led Lewisham Clinical Commissioning Group also opposed the cuts to services at Lewisham Hosptial. In their response they said:

'We have concerns that for the Lewisham population the outcomes will be poorer access, a reduction in overall quality and choice, poorer health outcomes and a widening of local health inequalities... Lewisham residents, Lewisham Council and Lewisham GPs have all voiced their opposition to these proposals very clearly... The draft proposals would lead to more expensive, complicated and longer journeys for Lewisham residents. Lewisham has a diverse population with pockets of particularly high deprivation across the borough. The issue of transport is a significant one for the population many of whom are dependent on public transport and have very limited incomes.

Lewisham residents are being hit hard by the financial crisis, mainly as a result of unemployment and loss of discretionary income primarily from benefit changes and increasing fuel prices.

If acutely ill patients are no longer admitted to Lewisham Hospital, this will result in increased costs incurred by relatives and carers when visiting patients admitted to alternative hospitals. As submitted by our Director of Public Health separately: residents from deprived communities in the three most affected postcode areas (SE6 4AN, 4TW, 2BY) will experience public transport price increases of £1.90, an 82% increase in the cost of travel. These costs cannot be reimbursed under the Hospital Travel Cost Scheme. Relatives and carers forced to use private hire transport will incur far greater price increases. Residents across deprived communities in SE6 and SE13 will experience price increases of between £5.30 and £16.60...

We do not believe that the claim that 77% of patients currently seen at Lewisham A&E will be able to be catered for at the new UCC [Urgent Care Centre]. Figures from other UCCs would suggest less than 50% and possibly as few as 40% of current attendees would have their needs met by this new unit. This has implications on patient flows with significantly more patients attending other units - chiefly from our local patient surveys during this consultation period, King’s College Hospital (KCH)'.

From this moment despair ends and tactics begin
It is no great surprise that the results of the consultation have been so comprehensively ignored. The reality of high profile consultation exercises is that a controversial proposal like this would never have been put in to  the public domain without prior agreement in principle that it is going to go ahead. The likelihood that nobody in Lewisham would like it would have been factored into the decision as a manageable risk - after all nobody in Lewisham votes Conservative anyway..

The only way these proposals are going to be defeated is if the political risks to the Government spread further than they had planned. The closure of Lewisham services needs to be raised as a national issue that shows what's really happening with the NHS, linking up with similar campaigns elsewhere such as those opposing A&E closures at Earling and Central Middlesex hospitals.

And people in other parts of South London, including in Southwark, Bexley, Bromley and Greenwich, need to be shown how the cuts at Lewisham will have a knock on effect on them by placing a greater strain on accident & emergency and maternity services in their area, as well as making them have to travel further for health care in many cases. 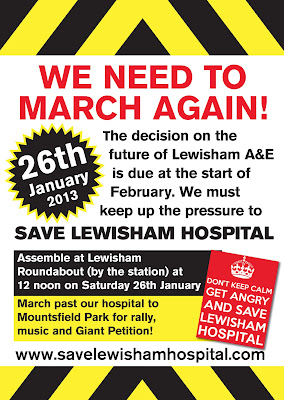 Then there will be another Save Lewisham Hospital demonstration on Saturday January 26th, assembling at 12 noon at Lewisham Roundabout (by the station) and marching to Mountsfield Park. Details of how to get involved in building the demonstration here.