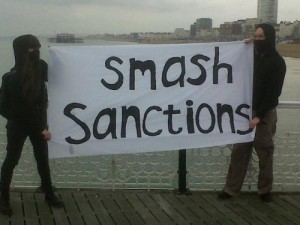 In January this year, 110,000 people had their benefits stopped – ‘sanctioned’ – in a social security system that now leaves people with nothing for up to three years.

The government has not revealed how many thousands of people have been sanctioned since then, but it looks clear that more than a million people will have faced sanctions - and the hunger, pressure on families and stress they cause - by the end of the year.

Workfare, which forces people to work without pay and pushes those in work out of their jobs, is still the government’s ‘flagship’ solution for the unemployed. Osborne’s latest workfare proposal is more than twice the length of a maximum community service sentence.

But people’s action is pushing back their plans:

This is your actions making a real difference.

The chances are you probably know someone who has faced the hardship and stress of sanctions – which means you’ll know that these devastating decisions are handed out for the pettiest of reasons.

It’s time to take action, and to push back against sanctions as we have against workfare. Whether you’re on your own or in a group, take part in the week of action

And let us know what you plan so we can help spread the word!

Read testimonies from people who have been sanctioned here

A recent CAB report about sanctions found that:

-60% of those sanctioned had been receiving JSA, but a further 33% were unfit for work and were receiving ESA.

-40% of respondents said they had not received a letter from the Job Centre informing them of the sanction.

-Almost a quarter of respondents did not know why they had been sanctioned. 29% of respondents said they had been sanctioned because they had not done enough to look for work. However, many people commented that the sanction had been applied unfairly, when they had in fact looked for work or attended an interview as required, because of a very narrow interpretation of the rules or for reasons that were beyond their control.

-More than half the respondents said they had not received any information about how to appeal against the sanction. Nonetheless, three-fifths (62%) of respondents had appealed. One third of these appeals had been successful and a further 23% of those who had appealed were still waiting to hear the outcome. Administrative delays in receiving formal notification of the sanction meant that a number of people had been refused leave to appeal because they were out of time, adding further to the perception that they had been treated unfairly.

-Two-thirds of respondents had been left with no income after the sanction was imposed. Those with children reported they only had child benefit and child tax credits.

-Just under a quarter (23%) of those sanctioned were living in households with children. More than 10% of respondents were lone parents.

-Respondents coped with the loss of income by borrowing money from friends and family (80%), from the bank or on their credit card (8%) or from a pay day loan company (9%).

-They also cut down on food (71%), heating (49%) and travel (47%). Almost a quarter (24%) had applied for a food parcel. Some respondents had been left to scrounge for food from skips or bins, or had had to resort to begging to feed themselves